Reuben (Ruben) Frederick Barton was a driver in the Royal Field Artillery, 23rd Div Ammunition Column, service number 67762. He was 24 when he was killed in action on 29th July 1917.

Reuben was born in the first half of 1893 at Little Bromley, the only son of Frederick Barton (an agricultural labourer, and later Stockman on a Farm) and Emily Barton (nee Sargent).  Reuben had two sisters - Eva Emily (born in 1890) and Selina Mary (born in 1900).

The 1891,1901 and 1911 Census all show the Barton family living in Bentley Road, Little Bromley.  We also know from SDGW that Reuben was still living in the village when he enlisted.

Reuben's Army Service Record does not survive, but we know that he volunteered to join the Artillery at Colchester - probably in late December 1914/early January 1915.  He was given the Service Number 67762, and the rank of Driver.  It is pure conjecture, but the fact he was a Driver may suggest that his civilian occupation could have been connected to horses in some way - not very unusual for someone from a rural area at that time.

Reuben disembarked in France (at Boulogne) on 25 August 1915, as part of the 23rd Division.  It looks like he remained with the Division until his death, and from information provided to CWGC it appears that he was - at least for a time - part of the 23rd Divisional Ammunition Column.  As such, they would have been a part of the chain which provided artillery and small arms ammunition from the supply dumps in the rear areas to the front line troops and artillery batteries.

It was whilst the 23rd Divisional Artillery were taking part in the the week long preliminary bombardment of the German defences, prior to the commencement of The Battles of Ypres 1917 that Reuben was killed in action aged 24, on 29 July 1917.  The Third Battle of Ypres actually began two days later, with what is officially called The Battle of Pilkem which took place between 31 July 1917 and 2 August 1917). 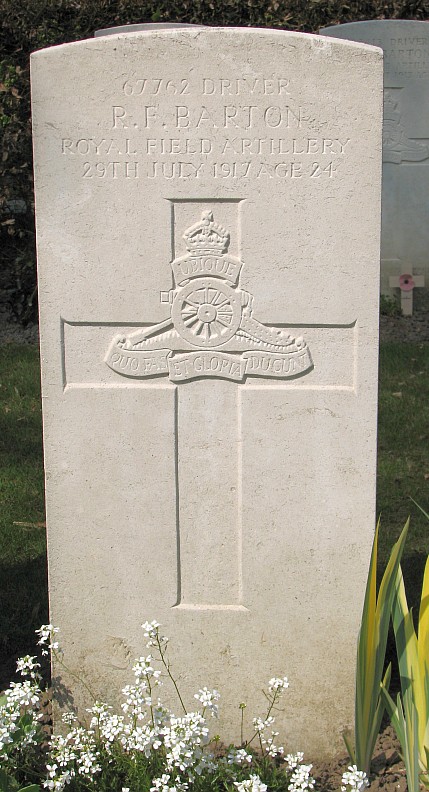