Edgar was born in 1878, the family home being Little Bromley Hall.  Edgar's father, also named Edgar, was one of the principal landowners in the village and the family had lived at the Hall since at least the 1870s. In the 1871 Census he was a "Farmer of 640 acres, employing 23 men and 19 boys". Young Edgar was sent away to Boarding School for at least part of his education, to The Grange at Greenstead Green, near Halstead.

It is not clear where Edgar was living in 1901, but he was employed as a Draper's Assistant.  At some point in the next ten years he travelled to Canada. On 9 April 1915, in the small city of Portage la Prairie, Manitoba, Edgar volunteered to serve as a soldier with the Canadian Overseas Expeditionary Force (C.E.F.).  His Service Papers show that he was 5 foot 9 ½ inches tall, had a fair complexion with grey eyes and brown hair.  Edgar stated that he had been employed as a Clerk but we have no precise details.

Edgar left Canada for England in October 1915, and remained there until April 1916 when he was posted to France.  After a short period of further training, Edgar joined the 27th Battalion of the C.E.F. "in the field", on 5th May 1916.

On 15th September 1916, during the Battle of the Somme, Edgar was killed in action, whilst taking part in the Canadian Corps' successful attack to capture the village of Courcelette.  The Canadians assault was part of a wider Franco-British attack on that day, which also saw the first ever use of the tank in warfare.  In a week of fighting around Courcelette between 15 September and 22 September 1916, the Canadians suffered in excess of 7,000 casualties.

Edgar Cooper is commemorated on the Vimy Memorial, near Arras in France. This imposing Memorial bears the names of over 11,000 Canadian servicemen who died in France during the Great War, and who have no known grave. It is interesting to note that the plaque inside St Mary's Church states he was killed at Thiepval. In fact he was killed just outside of Courcelette, a few miles away. It was not uncommon that the next of kin were incorrectly informed of the exact location.

Edgar also has a commemorative tablet, shared with his father who died in the same year, on the wall in St Mary's Church, Little Bromley. 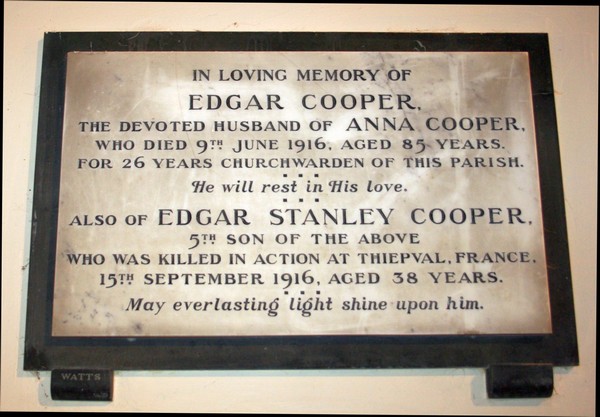