George Cole was Lance Corporal in the Bedfordshire Regiment, 1st Bn. service number 33373. He was formerly in the Essex Regiment, #26902. He was 32 when killed France & Flanders on 23rd April 1917.  George was born and lived in Little Bromley, the son of Jonathan and Mary Kezia Cole of Chequers Road, Little Bromley.

George was born circa 1884/85 in Ardleigh, though one source states he was born in Little Bromley. He was one of the younger children of Jonathan Cole (born circa 1842/3 in Ardleigh) and his wife Mary Jaggard, also from Ardleigh. In common with a large proportion of the males in this area during the late 19th century, Jonathan was an Agricultural Labourer. Jonathan and Mary got married in Feb 1866 and by 1911 their marriage had produced 11 children of whom 10 were still living. The family lived in Ardleigh and Lawford, before moving to Chequers Road, Little Bromley, sometime between 1891 and 1901.

The 1901 and 1911 Censuses show that George was still living with his parents, and was a Farm Labourer – or as the earlier Census states an Ordinary Agricultural Labourer. At some point after April 1911 George started work at the Xylonite factory at Brantham – Xylonite being an early plastic, and a trade name for Celluloid.

George was involved in the early stages of the manufacturing process, in what was called the Acid Department. He left employment at the factory on 1 March 1916 when he was “called up” for service with the British Army. At the time he joined the Army, George was still living in Little Bromley, and quite probably still at the family home on Chequers Road.

George enlisted at Warley, and appears to have been posted at least initially to the Essex Regiment.  There is also evidence to suggest that at some point prior to being posted overseas, George was transferred to the 25th Battalion Training Reserve at Parkeston; here he may have received some of his Basic Training or it may have been a temporary posting prior to being sent overseas.

George Cole’s Service Record does not survive, and at present  I have been unable to establish when he was sent to France. At some point during his service George was promoted from Private to Lance- Corporal: this suggests that he must have demonstrated some qualities his superiors thought were commendable, and which perhaps made him more suitable for those responsibilities than others amongst his comrades at that particular time.

We do know that the only Regiment George served with overseas was the Bedfordshire Regiment - whilst serving with the 1st Battalion he was killed in action on 23 April 1917 at the age of 32. The Battalion was taking part in an attack against the village of La Coulotte, near Lens, in the course of which it suffered nearly 100 killed, and many more wounded. This attack is regarded as a subsidiary action of The Second Battle of the Scarpe, which itself forms part of what is now commonly known as The Battle Of Arras. 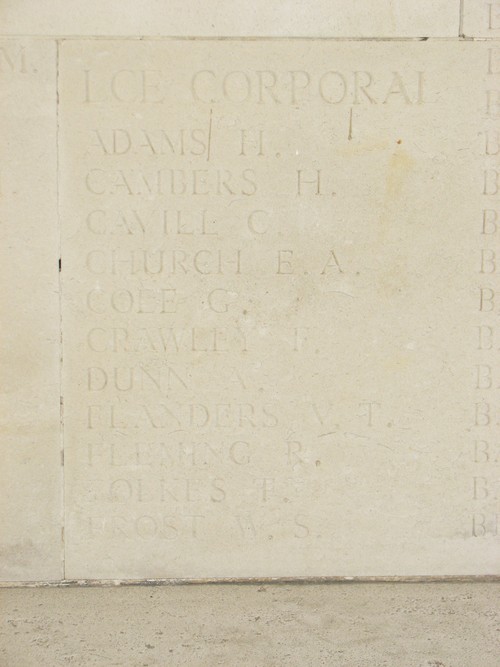