One hundred years ago this month (Mach 2018) the stalemate that had existed on the Western Front for over three years was shattered by a series of German attacks directed primarily against the British Expeditionary Force.  Amongst the thousands of British dead was Alfred Lucas.

Alfred Benjamin Lucas was born in Dovercourt in 1878, the eldest son of Daniel Lucas from the town, and his wife Emma Jane (nee Boxold), originally from Sussex.

Alfred grew up in Dovercourt, possibly raised by his maternal grandparents Benjamin and Jane Boxold.  After leaving school he followed his father's trade as a Carpenter and Wheelwright.

In the summer of 1904, he married Edith Eliza Payne, from Chequers Road, Little Bromley, who brought a four year old son called Hilton to the marriage.  How Alfred and Edith first met is not known, but Alfred’s parents moved to Jasmine Farm on Bentley Road, Little Bromley in the early 1900s.

The April 1911 Census shows Alfred, Edith, their daughter Elsie Emmeline (born 1909) and Hilton, living at 111 Harwich Road in Parson's Heath.  At some point in the next three years, the family moved to Wix.

Alfred volunteered to join the Essex Regiment in December 1914 at Colchester, and was posted to their 10th Battalion.  In late July 1915 his Battalion was sent to France as part of the 18th (Eastern) Division.  Amongst the battles that they took part in over the next two and a half years were The Battle of the Somme in 1916 and the Third Battle of Ypres the following year.

In the early hours of 21st March 1918, the Germans launched the first and largest of a series of massive attacks.  Variously called the Kaisersclacht (Kaiser's Battle), the March Offensive, or the Ludendorff Offensive, it quickly resulted in the greatest advance made by either side on the Western Front since the autumn of 1914.

That morning, Alfred and the 10th Essex were manning a section of the front near the village of Ly-Fontaine, south of St. Quentin.  Many British units in the area were completely overwhelmed by the size and severity of the German assault.  The 10th were fortunate to manage to withdraw with the greater part of their personnel intact, but sadly Alfred was not among them. 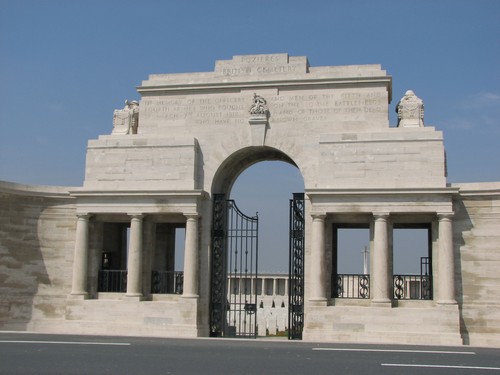